It’s time for another book review and this one based on a place I used to visit regularly as a child. When we lived in Canada, we were very close to Niagara Falls. Going to the falls whenever we had visitors was something I was very fortunate to have done between the ages of 5-8. So often, in fact, I came to take the thundering water and viewing deck for granted. But for children who grow up in the shadows of the falls, this reserved admiration is not an option.

Bridges-A Tale of Niagara brings to life the community behind the natural wonder that dominated much of my childhood, Niagara Falls. The prologue opens into one of those moments you can’t help wonder about if you’ve ever looked across the majestic gorge or ridden through it s frigid waterfall: someone has done a fool hardly, daredevil stunt.

dk LeVick puts a spin on this expected turn of events by quickly revealing that Ken is not a reckless teen but a dedicated firefighter, sent to rescue the thrill seekers. We move from this action filled opener into Kevin’s childhood in the early 1960s in Canada and all the decisions that lead up to the fateful moment on the ice bridge. 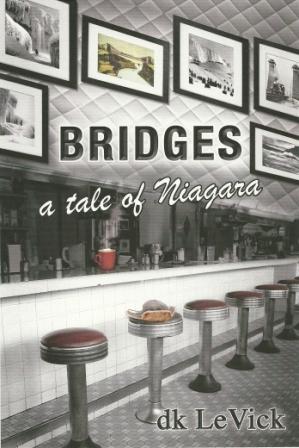 The reader experiences boyhood through the eyes and ears of Kevin, Lennie, Wayne, Billy and their frien-enemie, Chuck including the racial and socio-economic dynamics in this coming of age story replete with now nostalgic references to the newness of Coca-Cola and French Fries, all in the shadow of the Falls.

LeVick intersperses Kevin’s story with glimpses of historical characters from the early mid 1900s that have their stories also tied to Niagara including Francis Abbot, a self-exiled musician who commits suicide in the waters of the falls. Abbot and his legend becomes a character in the book as well other fictional people like newlyweds traveling to Niagara during one of the bridge formations. These historical glimpses include a segment in the Civil War as well as the freedom story of Lennie’s ancestor as she runs with her family from slavery into the Canada.

Other characters are situated within present day and Kevin’s life like Ol’ Gordy. This character with his collection of photos and stories about the falls is also an effective narrative device as through his tales and memorabilia the reader learns considerable amounts of Niagara history. It is at Ol’ Gordy’s soda counter where we first learn about the ice bridge which features so prominently in the prologue and spans the length of the book.

Bridges is an ambitious work, spanning a century of those who visited, loved, and were mesmerized by Niagara Falls written by an author, who grew up in its shadows as a self proclaimed “river rat”. For those who are planning a first time trip or have returned with a sense of wonder about the place, this book will be a keepsake of the wonder, mystery, and majesty of North America’s most spectacular natural wonders.

Please vote for my blog (A Day in Doha) in the traffic-breaker poll for this tour. The blogger with the most votes wins a free promotional twitterview and a special winner’s badge. You can vote in the poll by visiting the official Bridges blog tour page and scrolling all the way to the bottom.

You can win a free paperback copy of Bridges: A Tale of Niagara by entering your name and email address on its official blog tour page. The winner of the give-away will be announced on Wednesday, June 29 – be sure to enter before then!