I’m not sure if it was attending Thrillerfest, or if thrillers are in the air due to their being a popular choice for summer reading but they certainly are gaining attention here in the Author’s Studio. My first interview for the Author’s Studio was with Terri Giuliano Long, author of In Leah’s Wake, a thriller, couched in family drama.

For our second behind the scenes of in a writer’s life, we’ll spend time with another thriller author, Sean Keefer whose book The Trust, has an added element in that it is a legal thriller, a sub-genre made very popular by bestsellers including John Grisham among others. These two authors demonstrate clearly that not all thrillers are the same; rather thrillers or suspense is a vast enough category to have sub-genres.

Perhaps soaking in all this suspense will inspire you (or me) to try our own hand at making heart’s thump? In the meantime, let’s find out more about Sean’s inspiration in setting down this tale of a lawyer named by an unseen grantor in the deceased’s will. If this does get your thriller juices going or you have more questions for Sean, let us know. Watch the Book Trailer for The Trust.

1.  How did you get started as a writer?

I’ve always been interested in writing, but never tackled anything longer than a magazine article or a short story – that is before The Trust.  However one day I realized that an idea had been following me around for several months.  Since it wouldn’t go away, I decided to start working on it and see where it went.  The Trust is the result of that idea.

2.  What was the hardest part of writing your book?

The two hardest parts of writing The Trust was getting started.  Once I actually started writing, it only took about 7 months until the final period was typed.  Then the second hardest part started – the editing.  It took more than a year to get it in a form that I was happy sharing with others.

3.   Was there any part of writing the book that surprised you?

The easiest part was literally the ease with which the writing flowed once I got started.  There were times I felt like I was more so watching a story unfold rather than writing it.  As I worked through the book, I found myself eager to get back to the writing to see what happened to the characters.

4.   What advice would you give you aspiring or first time novelists?

The best advice I could give writer who is just starting out is to write diligently and write often.  The more you write, the more your writing will improve.  If you don’t have anything written, you don’t have anything to edit.  Even if you’re not happy with the writing, you have a product on which you can work to improve.  If you’re not writing, then you’re really not a writer.

5. Anything else you want to tell readers?
One of my favorite parts of the writing and publishing process is hearing from readers.  I can be reached through my website and would love to hear from the readers with their thoughts, comments or questions. 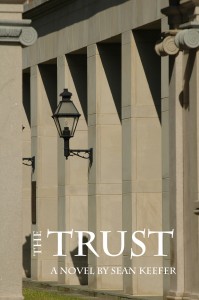 “It’s a simple question, Mr. Parks.  Tell me how your name came to be in this Will?” he said.

“I’ll say it one more time.  I have no idea, Mr. Thomason, and I think it’s time you leave my office,” I said.

That’s how my relationship with Steven Thomason started.

Steven Thomason walked in my office for the first time on a day when my secretary had decided her day would be better spent elsewhere.   In fact, in retrospect, I’m quite sure it was a day that I felt could have been better spent elsewhere.  The beach, a bar, anywhere other than my office.  It was this day Steven Thomason chose to walk into my office.  Without an appointment I should add.

Given that I was alone in my office on the day he decided to insert himself into my life, dressed for the gym, and facing a desk already full of plenty of other things I could be doing, I really had no desire to deal with a walk-in.  After all, I didn’t run a beauty salon.

So when I heard the office door open that I cursed under my breath and rolled my eyes before I walked out into the lobby to see what surprise awaited me.

There I found that a man who looked to be about 60 had made himself at home in my lobby.  He was dressed casually in a personally tailored way – pressed khakis, a pale blue oxford button down and lace up, toe-capped shoes.  He had an aura of confidence and sophistication about him that was accentuated by his full head of gray hair and rugged complexion.  He sat with his legs crossed.  I looked at him a moment and realized that, while the chair he was in was a garden variety waiting room chair, the manner in which he was sitting in it made it look as if it had been custom built for him.  He was reading a newspaper, a steaming cup of coffee to his side, briefcase at his feet.  I was momentarily taken aback by his appearance as most people who simply arrived at my office didn’t look quite so refined.

I glanced down at my tee shirt and shorts and put on a smile, “Hello. May I help you?”

He raised his eyes from his paper and looked over the reading glasses perched on the end of his nose.  He studied me from head to toe then back again before locking my stare. I guess my wardrobe justified the added scrutiny.

I glanced over my shoulder, my eyes falling on a sign to the side of the receptionist’s window that read “Noah R. Parks, Attorney at Law.”  I turned my gaze back to him.

Ignoring my question, he put down the paper. “Attorney Noah Parks?  From Myrtle Beach?”

Now this was interesting.  It was not often that I found myself both perturbed and curious.  This was certainly an exception to this rule as both of these sensations were growing by the moment. “Yes, and generally, yes.”

He contemplated me for a moment more, allowing the silence to linger just long enough to make me notice, folded his newspaper, then stood.  He brushed his pants and spoke again.

“Is there somewhere we could sit and speak?  There is a matter at hand with which I require your assistance.”

Brash, I forgot to mention brash, another characteristic my guest exuded.

I was still perturbed, but the curiousness I was feeling had started to change to intrigue as the encounter was shaping up to be at least potentially a bit out of the ordinary.  I had found that sometimes out of the ordinary, in addition to occasionally being interesting, could also be profitable.  I wasn’t expecting anything earth shattering, but I decided to go with it and see what this man had to say.

“Certainly, but I didn’t catch the answer to my question.”

He paused in silence for another long moment.

“Steven Thomason. And if you don’t mind,” he said as he looked back toward my conference room. “We have a lot to cover.”

I waited another moment to see if he would finally offer his hand, but as the moment stretched thin, I stepped to the side around him and walked towards my conference room, still without a handshake from my guest.

He stooped to retrieve his briefcase and  followed.

Please vote for my blog in the traffic-breaker poll for this tour. The blogger with the most votes wins a free promotional twitterview and a special winner’s badge. You can vote in the poll by visiting The Trust official blog tour page and scrolling all the way to the bottom ( and selecting A Day in Doha).

You can also enter to win a free paperback copy of this novel. The winner of the give-away will be announced on Wednesday, August 10 – be sure to enter before then!