A few days before Christmas (and well in Hanukkah) but a writer’s work is never done. Join me for the last edition of Inside the Writers’ Studio, featuring an interview with Monique Domovitch author of a thriller with a variety of international settings set in the 1940s-1960s. For those you who didn’t always want to be a writer, Monique’s story will be encouraging. She got her start after trying her hand at a few other things first. 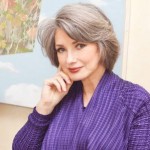 Monique Domovitch began writing at the age of fifty-five. Two years later, she has two self-published novels—her Scorpio Series—and a three-book deal with Penguin, for books she has written under the name of Carol Ann Martin. Never seen without her laptop, Monique and her husband travel the world and divide the rest of their time between their homes in British Columbia and California. Monique loves to hear from readers! Visit her on her website, Twitter, Facebook, or GoodReads.

You’ve had varied careers, the first of which was modeling. Looking back, what did you learn from your careers?

From modeling, I learned that by pretending a person can become. I was the shyest, gawkiest girl, but walking the runway taught me to hold my head high and smile in spite of my fear, and with time, the confidence I tried to project became real. From my years as a financial planner, I learned that I, and only I, am responsible for my financial security. This is a lesson I tried to teach women during my four years as a television financial coach. And from becoming an author during the last third of my life, I’ve learned that it’s never too late to follow one’s dream. Like the old Nike commercial says, “just do it.”

You married again late in life. Is marriage easier the second time around?

Maybe not the second time, because I was divorced twice. But the third time is the charm. Mind you, I was on my own for twenty years before meeting my new husband. I came to a point where I decided I’d rather be alone than in an unsatisfying relationship. And I was very happy with my family, friends, career and dogs. My life was full. I believe that when a woman is happy by herself, she’s less likely to make a wrong choice.

Do you believe in love?

Totally and passionately. But, and this is a big but, I think that it can be very easy to mistake passion for love, and although they are not mutually exclusive, they are not always both present at the onset. I believe that love is friendship on fire. For that reason, unless one person really likes another— and I’m talking, ‘Like,’ with a capital L here— real love is not possible.

Who has provided you with the most inspiration for your writing?

It wasn’t so much a ‘who,’ as a ‘when,’ that really pushed me to follow my dream of becoming a writer. I was fifty-five years old, had just retired after a lifetime of being a career person while denying my real dream, writing. That’s when I decided that if I didn’t do it now, I never would. You know how people are supposed to ask themselves, ‘when facing death, what they would regret not doing?’ For me the answer was writing. Writing is what I had always wanted to do.

What are you working on at the moment?

I’m almost finished writing the first of a three-book mystery-series for Penguin, which I write under the pen-name, Carol Ann Martin. I’m having a great time developing the main character—a career woman suffering from a burnout, and who escapes from her life to a tiny community, only to stumble upon a murder. Next, I have a stand-alone book that is about half done. I want to go back and finish that one. And then, I have the rest of my astrological-sign series, the next in line being Taurus, set in the investment world. More greed, deception and betrayals. And then the second of my Penguin books, and then…Sometimes I think I’ll never have the time to write everything I want to write.

Do you have a writing schedule?

Yes, all day every day 😛 Just kidding. I try to write eight full hours a day, or a minimum of one thousand words. But try as I might, I find that the first half of a novel just about writes itself. The words fly onto the page, but when I get to the fifty percent mark, the going slows to a crawl—especially in a murder mystery. I have to keep going back and forth making sure all the clues and details are there, but not so obvious they give everything away.

Where do you write?

I made myself a private space in my home and that’s where I go for privacy. But my best writing is often while I’m doing the dishes, or during long drives. That’s when my mind wanders and I dream up my next scenes, or come up with some snappy dialogue. I often stop and just down a few lines to remind myself for later.

What advice do you have for wannabe authors?

I don’t want to give anybody the same old advice about practicing your skill, getting an editor. My advice is, treat writing like a business, especially if you plan on self-publishing. Remember, your novel will be competing with millions of other novels out there. You have to come up with a plan to make yours stand out and get noticed. Of course the story and the style counts, but everything else counts too. Will you write for women? For young adults? For children? What publishing format should you choose? E-book? Soft cover? Hard cover? How much will it cost and how many copies must you sell to break even? How will you distribute your novels? What can you do to make them stand out from the millions of others? A new author should research what the best-selling authors have done to become successful, and then create plans of their own.

What do you do when you’re not writing?

People are always surprised to find out that I’m also a hobby beekeeper. I have one hive from which I harvested over forty pounds of honey last season. And I love to boast that my honey is absolutely wonderful. It has a floral quality, because of the area where we live. Victoria is the most floral city in North America.

If you had one wish, what would it be?

That one is easy. I wish for a long and healthy life, so I can keep writing for the next fifty years. Okay, fifty might be pushing it. Make it at least forty years. 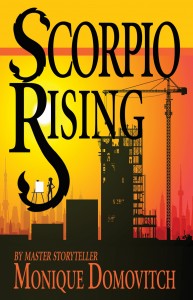 As part of this special promotional extravaganza sponsored by Novel Publicity, the price of the Scorpio Rising eBook edition has dropped to just 99 cents this week.

What’s more, by purchasing this fantastic book at an incredibly low price, you can enter to win many awesome prizes, including 2 Kindle Fires, Amazon gift cards up to $100 in amount, 5 autographed copies of the book, and 5 autographed copies of its recently released sequel, The Sting of The Scorpio. Be sure to enter before the end of the day on Friday, December 23rd, so you don’t miss out.

To Win the Prizes:

Over 100 bloggers are participating in this gigantic event, and there are plenty of prizes for us too. The blogger who receives the most votes in the traffic-breaker poll will win a $100 gift card as well. So when you visit Novel Publicity’s site to fill-out the contest entry form, don’t forget to say that I referred you, so I can get a point in the poll.

The Featured Events include:

Monday, Blogaganza on Novel Publicity! We’re kicking-off on the Novel Publicity Free Advice blog. We’ll ask the writer 5 fun and random questions to get everyone talking. Leave a comment or question in response to the post, and you may win an autographed copy of Scorpio Rising or its sequel, The Sting of The Scorpio. Don’t forget to enter for the other contest prizes while you’re over there!

Tuesday, Twitter sharing contest! A tweet is tiny, only 140 characters. But on Tuesday, it could win you $50. Send the following tweet across the twittersphere, and you just may win a $50 Amazon gift card. Autographed copies of Scorpio Rising and its sequel, The Sting of The Scorpio, are also up for grabs. The winner will be announced Wednesday morning. Here’s the tweet: Looking for a read that’s full of love, drama, and betrayal? Scorpio Rising has been reduced to 99 cents! http://ow.ly/7zA2s #whirlwind

Wednesday, Google+ sharing contest! Yup, there’s yet another awesome opportunity to win a $50 Amazon gift card, and this time it just takes a single click! Visit Google+ and share Emlyn Chand’s most recent post (you’ll see the Scorpio Rising book cover included with it). On Thursday morning, one lucky sharer will be $50 richer. Autographed copies of Scorpio Rising and its sequel, The Sting of The Scorpio, are also up for grabs. Three chances to win! How about that?

Thursday, Facebook sharing contest! Stop by Novel Publicity’s Facebook page and share their latest post (you’ll see the Scorpio Rising book cover included with it). It’s ridiculously easy to win! On Friday morning, one lucky sharer will be $50 richer. Autographed copies of Scorpio Rising and its sequel, The Sting of The Scorpio, are also up for grabs.

Friday, special contest on the author’s site! Win a Kindle Fire! Two are up for grabs! Visit Monique’s website to leave a comment on any of her posts and sign-up for her author newsletter. One person will win for each method, so be sure to do both.