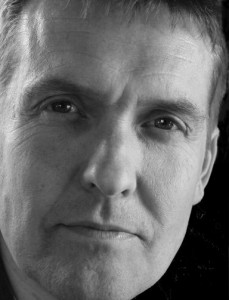 oday in the studio we have the privilege to talk with journalist turned writer William Knight. He currently lives in Wellington, New Zealand and is the author of Generation, a crime-thriller with an injection of horror in which  the main character, a journalist, Hendrix ‘Aitch’ Harrison links bodies stolen from a renowned forensic-research ab to an influential drug company.

And please vote for my blog (A Day in Doha) in the traffic-breaker poll for this tour. The blogger with the most votes wins a $50 Amazon gift card. I want that to be me! You can vote in the poll by visiting the official Generation blog tour page and scrolling all the way to the bottom.

1. How did you get started as a writer?
I was the classic earnest poet in my teens — with long greasy hair and red spots — morphing into a song writer for a rock band in my twenties — long greasy hair but few spots — and finally writing fiction in my thirties — with much less hair but absolutely not spots whatsoever. My professional writing life started ten years ago when I began writing features for technology magazines in the UK. I was very lucky, and managed to work as a freelance writer while my children were young. This is also the period I term ‘the epoch of the re-write’. While writing for newspapers and magazines as a day job, I re-drafted Generation — and also wrote two other manuscripts — in my spare time (which, with young children amounted to about 20 minutes a week).

2. What was the hardest part of writing your book?
The time scales. Actually putting my bum on a seat and writing is surprisingly easy — as long as you have the time in the first place, but re-writing, re-plotting, murdering superfluous characters and cutting scenes takes real, physical energy; it’s very draining. From first sentence to last rewrite (edit, proof-reading, mentoring and typesetting, took over eight years and I nearly gave up many times over.)

3. Was there an easy part or any part of writing the book that surprised you?
It turns out I’m much more of a perfectionist than I ever knew. While I did not really like re-drafting — there were about seven full re-writes — I found I was quite good at it, and wouldn’t let it lie until I was satisified. I’ve also discovered I am never satisfied which makes reviews hard to handle if they are critical and I agree with their points. I just want to keep going back and changing it, but now it’s out there I can’t.  (I secretly suspect it would be worse if I did another draft, but I think there’s a fine line between good re-drafting and over-writing when the reader can sense you’ve tried too hard to make it perfect).

My second favourite quote is “write it down then get it right”, and this should be translated literally. To my mind, the quote is only trumped by “The art of writing is the art of applying the seat of the pants to the seat of the chair”. Funnily enough, you can’t be a writer if you don’t write anything. Other than those quotes, I think everybody has to find their own way. You’ll soon get fed up with advice from writer’s groups, there’s only so much ‘show don’t tell’ you can take, and in the end you’ve just got to put the time in. There’s one more thing: wherever you go you’ll hear , “write every day”. For me, this advice just did not work. I am unable to set aside one hour a day, or three hours at the weekend. For me it is all or nothing. when I write it is as a professional, I take time away from the day job for weeks at a time and I put together an entire draft in the time I have available. It’s like a project, and while this approach may not work for all, it works for me.

Get Generation on Amazon or Barnes & Noble – you know you want to!

Be sure to enter for your chance to win an autographed copy of Generation : ENTER HERE.

William Knight is a British born journalist and technologist currently living and working in Wellington, New Zealand. He’s chased a varying career starting in acting, progressing to music, enjoyed a brief flirtation with handbag manufacturing and was eventually wired into technology where he’s been since 1989. In 2003 he published his first feature in Computing magazine and has since written about the many successes and failings of high-tech for the Guardian, Financial Times and the BBC among many others publications. He continues to maintain a lively IT consultancy. Connect with William on his website, blog, Facebook, Twitter or GoodReads.