November. The dregs otherwise known as National Novel writing month. Last year I took the opportunity to write a novel fictionalizing my experiences at the women’s college, Peace, the administration of which a few months prior announced it would admit men The book, Saving Peace, was shortlisted for the Kindle Book Review‘s literary fiction prize. 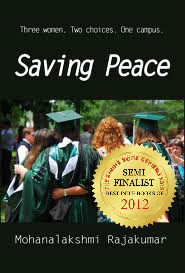 Over the summer I edited and released two books, rewrote a third, and wrote new chapters for a fourth. I was on a roll. All the while, NaNoWriMo loomed closer and closer. I tried to sweep my decks clear: I put the revision project on hold, cranked out another 10,000 words on the new project, and perfected a draft of my first short documentary film.

Into week two, one emotional crisis, several days of blank screens, and early bed times later, I’m several thousands of words behind. I have managed 6,000 words into this new project, the idea for which I had sometime last year. I booked November 2012 to write this story about a group of women who live in the same neighborhood yet are at odds with each other, despite the veneer of friendship. The twist? They’re all expats. Some of them have housemaids. One of them is pregnant, and no one knows who the father is.

The stuff of drama.

Hopefully tomorrow everything will calibrate itself and I will get back on the horse. Even if it doesn’t, I have an hour set aside to write with our local writers’ group, specifically as a NaNoWriMo write-in.

“You don’t even need to do this,” a good friend, a non-writer, said to me in the clear and encouraging voice of reason, trying to get the overachiever off the ledge.  “You’ve already done it once and finished it.”

She made sense. She was right. But she’s never felt the vortex of NaNoWriMo. How the crazy energy of people talking about it, particularly on Twitter, makes you want to roll up your sleeves and be where the rest of the nerdy kids are.

Here’s a taste of this year’s NaNoWriMo, working title, The Dohmestics. And maybe you see why a lot of sleep is not in my immediate future. Did I mention we are hosting Thanksgiving this year?

Edna tripped over a toy at the foot of the stairs. “Alice!” No one answered, not even Adam who could see her from where he was sitting at the kitchen table. Edna picked up the Barbie shoe, cursing her sister who had insisted in another extravagant Christmas to make up for the months when she was away from her niece.

“Have you seen Alice?”

Adam shook his head in the negative, eyes trained on the computer screen. From the way he was hunched over, she was certain he was playing another one of those games that gave her laptop a virus during his last trip home. On the floor in front of the television was more toy carnage: there were dolls in various state of dress and undress strewn around. More gifts.

“If you’re going to live so far away,” Chrissy loved to say, “then when you’re here, I get to do what I want.”

Edna plopped the plastic high heel on the entryway table and opened the front door. There were ten children in the road, boys on bikes, and nannies holding toddlers by the fingers as they took hesitant steps down the bricked street. No sign of either of her daughters.
“Alice,” she called from the front porch. There were several pieces of sidewalk chalk strewn around the front step. Edna picked these up, along with the discarded sandals Alice had left behind.

“She’s at the playground ma’am,” the neighbor’s nanny, Maria said. She was pushing a toddler, Hamad, in a pram, as he did his best to wail and squirm his way out.  A few steps later Maria stopped and took a deep breath.  Edna kept scanning the street. Anyone would need a few breaths with a screaming two year old boy. When she came back to Maria, the maid hadn’t moved. And Hamad was soothing himself with his thumb.

Maria’s drawn face was her answer. Edna came down the two steps on the porch and led Maria by the arm to one of Alice’s play chairs. The wood was sturdy enough to hold an adult. Out of habit, she put the back of her hand on Maria’s forehead to feel if she had a temperature. No heat there.
“Tired?”
Maria was tight lipped and her skin waxen. A few beads of sweat appeared on her upper lip though October brought the cooler temperatures.

Maria opened her mouth to answer but stood up suddenly, nearly clipping Edna under the chin. She ran to a nearby bush and began retching.  Despite the horrendous sounds, nothing was materializing.

Edna began approaching the maid, now on her knees, the teal pants of her uniform in the sand. Hamad had fallen asleep, worn himself out from crying.  The maid paused, took a few breaths and wiped her hand across her mouth and then her face. Edna bent down next to her.

“No.” Maria’s quiet answer had a layer of desperation mirrored by the wrinkles on her forehead.  “Please ma’am. I will be alright.” She struggled to her feet, Edna bracing her with an arm, and back to the stroller.

“If I see Alice I will tell her to come home.”

“Thanks,” Edna said. She watched Maria’s retreating back, wondering what Noof was doing at that exact moment. She had a fairly good idea that her Qatari friend was not picking up her children’s playthings or other discards.  Or that she had any idea her ill maid was wheeling her toddler around with the risk of infection. Maria was one of the few people Edna trusted to babysit for Alice and Noof was willing to share her services when their family was traveling. The maid was normally so conscientious; the brief incident was very out of character.

Edna was torn between texting Noof, getting dinner ready and walking around the neighborhood to look for her daughter. The sun was setting, casting the adobe colored buildings in a haze.  The grumble of her stomach won. She turned back into the house, sandals in one hand and chalk in the other.