We are back in the writer’s studio this week with novelist Rachelle Ayala, author of Michal’s Window, as well as a new release, Hidden Under Her Heart. All of her projects tackle sensitive issues related to women’s lives. She was a software engineer until she discovered storytelling works better in fiction than real code.  Rachelle is an active member of online critique group, Critique Circle, and a volunteer for the World Literary Cafe. She has three children, taught violin, made mountain dulcimers, and lives in California with her husband.  Follow  her latest on Twitter @AyalaRachelle.

She’s even taken time to outline three important terms every serious fiction writer needs to have a handle on – with examples! – so be sure to check those out at the end of the interview.

How would you describe your writing persona in 5 words or less?

Describe yourself in one sentence.

Compassionate and kind-hearted, I strive to increase positive energy in the world by doing good.

Where would you live if you could live anywhere in the world?

Exactly where I am. The San Francisco Bay Area is unparalleled in cultural diversity, cutting edge technology, and natural beauty.

Did you have support at the beginning and/or during your decision to be a writer?

Ha, ha, unfortunately not. However I am very strong willed and will succeed whether others believe it or not.

Do you read reviews written about your work?

Yes. It has really helped to toughen me to criticism. Here’s a thought on reviews: No time for those who hate me because I’m way too busy loving those who love me.

Daydreaming and chocolate chips, although my husband says I have to break my habit on both. I have a general idea of my characters and the problems I want to put them through, however I don’t have a plot until I start writing. I’m not an outliner, but I do think of the main crisis and climax first. For example, in Broken Build, I knew exactly what I wanted the villain to do to Jen, the main character. I then have to figure out a way to get the plot to that point, but that doesn’t happen until I start writing. The beginnings of my stories change the most because I try different ways of starting. Everything builds toward the ending and once I’m past the halfway point the momentum picks up and I work very fast.

Do you write on a desktop/laptop or a studio?

I write wherever my laptop happens to be. Usually I’m sitting at my dining table or in a comfy chair in the family room. I don’t have a private area, but I’ve learned to tune out all distractions from my years as a cubicle dweller in a high tech firm.

Do you have a day job?

Yes and no, if you count full time mothering and tending a husband as a job.

Do you have any advice for other aspiring writers?

Be true to yourself. You are the only person who can write the story you are writing. No one else can do a better job. Your voice is unique and  your creativeness is your mark on the story. Study the craft of writing. Don’t let others tell you what or how to write. Put the story above everything else and the rest will take care of itself.

Here are a few of Rachelle’s definitions of important terms for fiction writers. She’s also given us paragraphs which illustrate their usage.

Deep POV – digging into the head of your character and allowing the reader to experience the scene directly. Feelings, emotions, visceral reaction, internal thoughts are played out in real-time without filter words “he saw,” “I felt”, “she realized.” 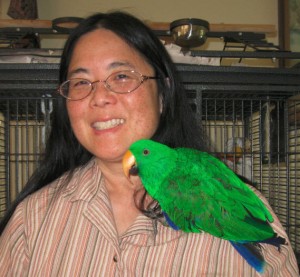 Dave staggered into the kitchen, his fingers numb and his heart jittery. He’d frightened her. What the hell was wrong with him?

His hands shaking, he poured himself a whiskey on the rocks. Work, Dave, work. Think of nothing else. Shut down if you can’t control your emotions. He woke his laptop and checked his email. Thirteen minutes before midnight. He lowered his head to the table. Memories overloaded his brain circuits. Drink. Oblivion.

Purple prose – exaggerated emotions, feelings and metaphors. A bane of romance when describing love scenes. Pulls readers out of the story, resulting in giggles instead of passion.

She eased into the kiss. She could be controlled, maybe. His scent, a mingling of fine cigars, resinous wood, and pure male sexiness kindled fires deep within. She opened her mouth and teased the curve of his upper lip, alternately tangling and dodging his tongue. He growled like a subterranean earthquake and clasped her head to deepen the kiss. A fiery current passed between them and flared from her chest to her lower regions. Her heart rate soared, and she could barely breathe, as if her spirit had been sucked out and exchanged with his.

Abstract metaphor – compares an abstract principle to something concrete. Metaphors are used to create memorable imagery.

The press of his luscious lips whisked her out of the world. She lost all sense of time and place, flung out like a star into a galaxy painted across the night sky. The music faded, the lights dimmed, and the crowd thinned. She was alone, in an unforgettable realm, surrounded by Lucas, carried away in his strong arms, safely tucked beneath his heart. Silence reigned for a heavenly moment and time stopped to the ebb and flow of a single kiss.