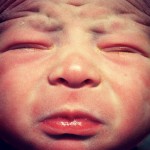 I found this image on Google at about 4pm on Monday when I decided being 9 months pregnant meant I needed to take advantage of April Fool’s Day to get a joke over on my husband who is a notorious prankster. The only reason I-had-the-baby-come-to-the-hospital message worked is because it was so last minute (I’m a terrible pranker and dissolve into giggles). Unlike his pranks – which this year included hiding in a friend’s car and then jumping out to scare him – I didn’t make him go all the way to the hospital to find that I wasn’t there. I let it go about 10 minutes.

I got him so good, I decided the joke was too good to waste and shared with my family, co-workers, and friends via email/Facebook, saying “Mohammed is here!”.

Half the people thought it was hilarious.

The other half were utterly confused when I showed up on April 2nd with my protruding belly.

Some in each category even wrote back and said “Oh, is that his name?”

I guess this goes down as one of the best April Fool’s jokes of all time for me. Spontaneity rules.

Did you prank anyone? Were you pranked? What’s in your hall of fame?