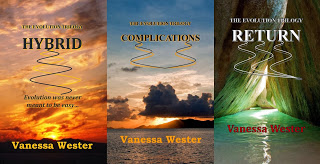 Ever wanted to know what it’s like to write a triology? Hear Vanessa Wester’s story from the trenches. Feel free to ask her questions in the comments section.
On the 14th November I (Vanessa Wester) published the last book of The Evolution Trilogy… RETURN.  It was my dad’s birthday so the date was significant.
Both SMASHWORDS and KOBO allowed me to publish for pre-publication (Amazon sort this out), and all the Amazon links are on my blog.
I will now wait for the feedback (also known as reviews… eek!)I have worked really hard to take my baby to childhood then adulthood… I hope it can now go out into the world with its head held high.The Trilogy is suitable for mature readers of about 12 and above. In addition, my books have been enjoyed by both men and women of all ages, to my huge surprise.A lot of the Trilogy has been based on some of my experiences when arriving at university in the UK as a foreigner (colonial), from my swimming days as a teen, my experiences as an adult, and my upbringing on the Rock of Gibraltar. BUT, a huge amount has come from my warped imagination…When I found out I was pregnant again in 2008, on the same week I received my contract to return back to my teaching job after 7 years, I was convinced it would be a nightmare. My first two children were born 18 months apart and I had struggled with weight gain, depression, an underactive thyroid, loneliness, and the rest that comes with becoming a new parent…

My cousin also passed away aged 27 from a brain tumour, and other events happened to close family members that broke my heart. These made me reflect on my own life all the time, and I did not feel I had the right to complain about any hardships I faced. What could be worse than losing your life?

However, we all have the right to “suffer” and obtain sympathy for whatever makes us feel down. The characters in my trilogy encounter many difficulties, and I guess in a fictional setting it is easier to make things happen and talk about things that effect us all. The science fiction idea is complete fantasy, and the use of vampires is all for fun as explained in my blog post…

What I have learnt is that in life things happen for a reason. I have enjoyed every minute of being a parent for the third time. I was so much more relaxed, had fun with my daughter, and balanced three kids with some grace (most of the time… ha ha ha). It was whilst I sat watching my daughter at home that I started to write on a notepad, then progressed to a laptop, then computer… Once I caught the writing bug nothing stopped me and I became obsessed for a while. Every time my daughter slept, I wrote.

I bought a copy of the Writers & Artists handbook and tried to figure out the submissions process. I joined The Word Cloud, read a lot, and learnt to take critique. Then I saw the posts byDavid Gaughran, who wrote Let’s Get Digital on the Cloud… and decided to go for it and self publish. It took me months to figure out the process of ebook publishing, using the advice on smashwords. I quickly realised Amazon was where a lot of readers bought books – the dominance of the kindle! So, off to Amazon I went… Don’t even get me started on the paperback formatting!

When I was gifted an iPad by my father in law (thank you) my life changed. Social media became easier to use…

Now, I don’t want to bore you… I should write a book about this!

The point is… had I not got pregnant I would never have started writing books. As a child I dreamed of being a writer, but the fact I was scientifically minded made me abandon the dream as the years went by. Yet, the fusion of my interests and dreams has led me to write this Trilogy.

Like I say on my catch line… In the game of life, destiny is the winner

As an extra Christmas Gift HYBRID, the first book of the Trilogy, is now FREE…