JG Clay’s boyhood dream of bringing his unique combination of cosmic horror, dark fiction and science fiction to the masses is being realised. With the first volu 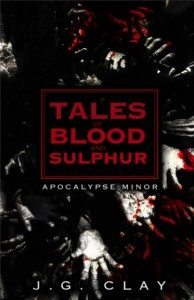 me of ‘The Tales of Blood And Sulphur’ under his belt, he is poised to unleash Gods, Monsters and weird events upon the world. Under Clay’s guidance, the Dark will become a little darker and Horror will go One Step Beyond.

When he is not destroying worlds, J.G likes to spend time with his family and friends, exploring the world of bass guitar, adding to his 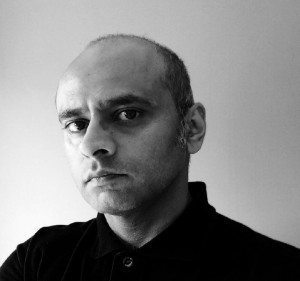 eclectic collection of music and watching as much geek TV and film as his eyes and brain will allow. He is an avid reader and a long suffering but ultimately optimistic fan of Birmingham City FC. (That’s football club for those us not in the know).

He hates cucumber, extremists of all stripes and colours and reality TV shows. Hear all about it on Twitter.

How would you describe your book in 20 words or less without using the blurb?
A bleak ride to the Dark Side. Horror that takes One Step Beyond.

If you wouldn’t be a writer, what you would be?
The next Doctor Who after Peter Capaldi hangs up his hat. Or a film director.

What’s your current guilty pleasure?
The music of Level 42 and Simple Minds. They were cool in the 80s. Not so cool now.

Do you listen to music while writing?
I mostly listen to the soundtracks of John Carpenter films. They have the right mood and ambience for the stories I’m trying to tell.

What is it you love most about writing? What’s the hardest part of writing for you?
I love creating the world, the characters and the plot. The hardest thing is getting started. Those bleak moments when it’s just me, a blank Word document and a flashing cursor are the darkest moments of my day.

Are you a plotter or a pantzer?

Mostly a pantzer. Detailed plotting feels too restrictive. I make a rough outline of where I want the story to go but it’s not much more than sketchy notes.

How did you come up with your premise for your books?
The ideas just come to me. For instance I woke up this morning with a novel idea from a dream I had. It often happens that way.

Are there any new authors that have grasped your interest?

Plenty. The main ones are Robert Pruneda, Duncan Ralston, S.E Rise, Michael-Israel Jarvis, A.J Alto and Kit Power. All fantastic authors with some great books to back that claim up.

Where is your work available?
Amazon and iBooks.

Do you ever run into someone who says “You write WHAT?”
Every day. A lot of people have this idea that horror authors are gloom merchants dressed in black, listening to dirge music and carrying a severed head. I’m quite a happy go lucky guy who dresses well and hates dirge music. It kind of weirds people out when I tell them what I write.

What is in the works for you next?
Next up, there’s a novella entitled Peace and Quiet. Time and Space, where I’ll be exploring Hell. After that, there should be two novels and a second Tales of Blood and Sulphur, all before the end of the year.