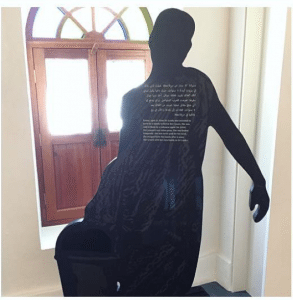 I went to a slavery museum today. Not in Washington, D.C. but  in the heart of old Doha. Yes, on the tip of the Arabian Peninsula, there’s slavery museum housed in a building dating back to the 1920s, which once belonged to the Bin Jelmood family. The feelings that well up when you’re inside the museum are different from what you might expect if you’ve lived here for a while. Yes, yes, you might think as you read the stories of trafficked people, from children to housemaids, on black people shaped silhouettes, let’s tell these stories.

“…. she is now back in Sri Lanka,” one housemaid’s anecdote reads, after a harrowing series of details about her working without pay for years in Lebanon. But how, how did get there? How many more are there? Questions that are left unanswered.

Further in the interior is an interactive exhibit on the history of camel racing and the movement away from using child jockeys, often malnourished and minors, to human shaped robots, is an interesting reflection on Qatar’s growing social consciousness.

Oh good, maybe now they get to go to school instead of racing you hope.

Yet outside the understated facility, scattered throughout the city, are men who sleep in the shade of road signs because their employers don’t provide them with a break room in a country where the summer temperatures rise past 40 degrees Celsius (100+ F).

Like most steps of progress, the Bin Jelmood house isn’t a complete answer to the modern indentured service happening across the Gulf Cooperation Council countries. But it is a very public, and very important step to talking about a taboo subject: the museum is the first of its kind in the Middle East region.

What do you think? Is talking about the context of global slavery a start? Or does it not go far enough?