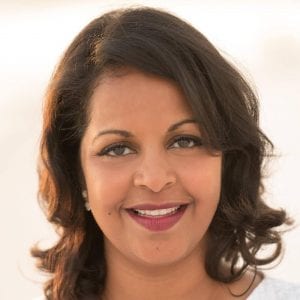 Mohanalakshmi Rajakumar is a South Asian American who has lived in Qatar since 2005. Moving to the Arabian desert was fortuitous in many ways since that’s  where she met her husband, had two sons, and became a writer.  She has since published eight e-books, including a momoir for first time mothers, Mommy But Still Me; a guide for aspiring writers, So You Want to Sell a Million Copies; a short story collection, Coloured and Other Stories; and a novel about women’s friendships, Saving Peace.

Her coming of age novel, An Unlikely Goddess, won the SheWrites New Novelist competition in 2011.

Her recent books have focused on various aspects of life in Qatar. From Dunes to Dior, named as a Best Indie book in 2013, is a collection of essays related to her experiences as a female South Asian American living in the Arabian Gulf. Love Comes Later was the winner of the Best Indie Book Award for Romance in 2013 and is a literary romance set in Qatar and London. The Dohmestics is an inside look into compound life, the day-to-day dynamics between housemaids and their employers.

After she joined the e-book revolution, Mohana dreams in plotlines. Learn more about her work on her website at www.mohadoha.com or follow her latest on Twitter: @moha_doha.