Short listed for the New Talent Award, Festival of Romance 2012

“…a deliciously tangled plot and insight into life on the Persian Gulf.”

“Love Comes Later is about love, choices, culture, bigotry, family, tradition, religion, honesty, forgiveness and friendship, to name just a few. The story allows a Westerner to actually see and feel what it is like to be a Muslim, with strong family ties, living in Qatar.” 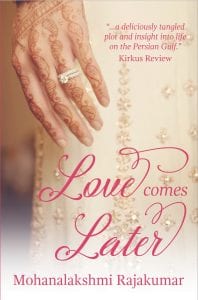 Longing for independence, Hind insists on being allowed to complete a master’s degree in England before marrying a cousin she hasn’t seen in years… a condition she’s surprised to find Abdulla readily accepts. When she finds an unlikely friend in Indian-American, Sangita, she starts down a path that will ultimately place her future in jeopardy.
Will Abdulla and Hind be stuck in a loveless marriage? Pick up a copy of “Love Comes Later” to find out.
Love Comes Later can be purchased from Amazon
More about this book…

Winner of 3 different awards, the greatest success of Rajakumar’s novel is the emotional journey the reader takes via her rich characters. One cannot help but feel the pressure of the culturally mandated marriage set before Hind and Abdulla. He’s not a real Muslim man if he remains single, and she will never be allowed freedoms without the bondage of a potentially loveless marriage. It’s an impossible situation dictated by a culture that they still deeply respect.
Love Comes Later pulls back the veil to reveal a glimpse of Muslim life.