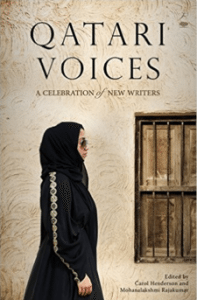 Qatari Voices is the first internationally published anthology of writing that represents 21 young creative Qatari authors. The anthology reflects the concerns and aspirations of the young Qatari generation illustrated in essays and stories.They are distilled from the first two volumes of the Qatar Narratives series, produced locally in the capital city of Doha.

They are intimate glimpses of old reminiscence and longing to the simple past, as well as photos that show concerns of a challenging present and aspirations to the future. They also tackle sensitive issues such as arranged marriages and gender discrimination. Qatari Voices is a mirror of reality of the Qatari society from a young generation perspective.

For more information on the anthology as well as the role it played as one of the first e-books by Bloomsbury Qatar Foundation Publishing, click to see media coverage in English and Arabic.

“The grains of my country’s sand may scar the palm of my hands but I will never let go.” These were the words of the patriotic Qatari national, Essa Abdullrahman Al-Mannai, describing his love for Qatar. Essa Al-Mannai is a prominent businessman in the country and he has lived here for the first fifty years of his life. He has witnessed first-hand the dramatic change that has occurred in this country, economically, culturally, educationally, socially and politically.”
–“Qatar: Through the Eyes of Essa Abdullrahman Al Mannai” by Noora Al Mannai

“They all say life is different now. Yes, it is different, much more modern, much more tolerant, and much better for women. I always imagine: what if I had been born in a different era? If I had been born, as a girl, in the Gulf, more than seventy or fifty years ago, would I have been able to enjoy these simple things? Which I believe are not only privileges but also rights. I would never know for sure. Because sometimes I think that, despite the changes, my life, in certain aspects, is not that different from my grandmothers.” –“A Different Life Now” by Maryam Ahmad Al Subaiey

“The personal essay has been a thriving writing form for over two thousand years, inviting the reader to eavesdrop on the writer’s mind as it meanders on a given topic or issue. A good essayist, like a good writer in any genre, seeks to cultivate an engaging voice, illuminate through concrete example, and transport the reader from an individual to a universal perspective. For aspiring writers in Qatar, the essay has proven to be a powerful vehicle for self-expression and dialogue in the public sphere.”
— “Introduction” by Carol Henderson and Mohanalakshmi Rajakumar