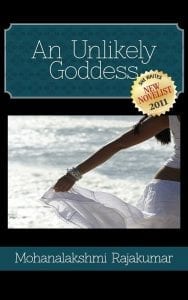 Winner of the SheWrites New Novelist competition 2011
“Mohana’s entry, out of all of them, stood out for its story and for its distinct and engaging voice. Mohana made us want to read more…”
Kamy Wicoff, author and founder of She Writes.com

“When a title fits the book in every way with everything within the tale, its like the sprinkles on top of a cake.”

Cabin Goddess
This is the story of Sita, a young South Asian girl growing up in America looking for love while wanting to stand on her own two feet. Available for purchase now on Amazon.com.

I hope the book trailer captures the feminine discovery of sexual and social power against the confines of religion and culture.

Sita is the firstborn, but since she is a female child, her birth makes life difficult for her mother who is expected to produce a son. From the start, Sita finds herself in a culture hostile to her, but her irrepressible personality won’t be subdued. Born in India, she immigrates as a toddler to the U.S. with her parents after the birth of her much anticipated younger brother.

Sita shifts between the vastly different worlds of her WASP dominated school and her father’s insular traditional home. Her journey takes us beneath tales of successful middle class Indians who immigrated to the U.S. in the 1980s.

The gap between positive stereotypes of South Asian immigrants and the reality of Sita’s family, who are struggling to stay above the poverty line is a relatively new theme for Indian literature in English.

Sita’s struggles to be American and yet herself, take us deeper into understanding the dilemmas of first generation children, and how religion and culture define women.