We love documentaries in our house, and  on a rare night home, after much debate, settled in to watch Capturing the Friedmans. The film left me sick to my stomach on many levels. First, the subject matter: a father and son brought up on multiple counts of child sex abuse. Second, the evident tampering with witnesses by the police and the alleged victims’ parents. Third, the failure of the justice system to deliver any semblance of fairness to this father and son.

Now, do I think Arnold Friedman was guilty of pedophilia? Yes. He told people he had been aroused by minors and also had a complicated childhood sexual history. He had child pornography in his home. Once this detail was leaked, the community around him gave a collective gasp. Was he guilty of the incredible amounts of violence he was accused of against 14 children? That answer seems much more difficult to suss out – at least the film would like us to think so.

In either case, his life is an example of what happens when public opinion turns  into hysteria. The truth is so murky, what actually happened in those computer classes, doesn’t matter. When you listen to the accounts of police leading children into testifying, badgering witnesses by many accounts, therapy that included hypnosis, which can plant false memories, the idea of parents who don’t want to be left out of the crisis, makes you squirm.

Yesterday was Palm Sunday, the day that the church calendar commemorates Jesus’ triumphant entry  into Jerusalem. He comes in to cries of joy, to the cries of people who thought he was going to liberate them from Roman rule. When he doesn’t, when he starts saying things like “My kingdom is not of this world”, rather than “Let’s arm the resistance,” people were less joyful. The week ends with the same people who had greeted him, turning into an angry mob, jeering as Jesus is broken,  hanging between other criminals, on a cross.

This Lent I have been reflecting on injustice and speaking out whenever I see the signs to call attention to various issues like Islamophobia and sexism. What I’ve come to realize is that injustice is rampant. Her elusive opposite, justice, or her cousin, mercy, unwarranted favor, is the rarest of humanity’s flowers.

“I have no faith in the system,” my husband said, after the film ended.

“You shouldn’t,” I replied.

From Ferguson, Missouri, to Delhi, India, the threats against our individual freedoms are clear.  Calls for reason, logic, and justice are important, not only because others deserve them, we may need them one day ourselves.  We are our own insurance against the mob.

Lent begins today. With none of the fanfare of Christmas, or the revelry of Mardi Gras, this is the Christian season of sacrifice, a time of introspection when we prepare for Christ’s coming sacrifice at the Crucifixion. Giving up something is a symbolic way of remembering what was ahead of Jesus and forcing us out of our everyday First World Problems.

In the past I’ve given up anger, buying new clothes, soda, tortilla chips – you get the idea. Every time I reach for one of those indulgences, I contemplate what it would be like to be really tested.

This year I’m trying positive reinforcement. Instead of not doing something, I’m making a commitment to speak out against injustice, misrepresentation and hate.

The Ted Talk by Clint Smith was my inspiration.

And this incredible anti-Muslim graphic, which popped up on my Twitter feed, is what I’m speaking out against today. The Spanish Inquisition and the Crusades were officially sanctioned acts of war by both Church and State. Where are those acts (or their leaders) represented on this graph? In what way are the actions of Mohammed ‘counted’ as violent acts to accumulate in such a tally? Pseudo-science like this fuel harmful misconceptions. 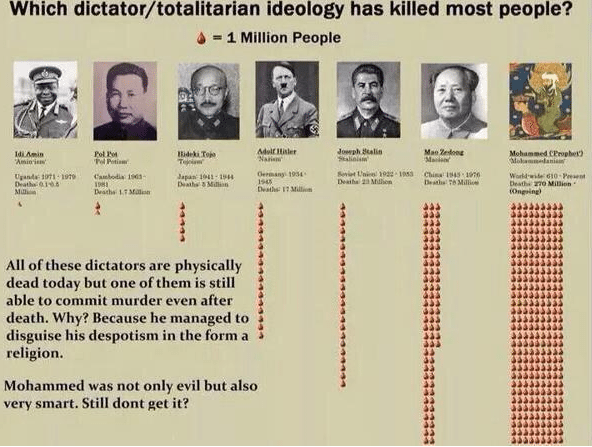