We’re back in the studio today with writer Susan Buchanan to get the scoop on her latest release.

The Dating Game is her second novel, and published on 2nd Nov 2012. Sign of the Times, her first novel, was published in March 2012. She will shortly start work on her third novel, due for release Spring 2013. She’s a busy woman and clearly someone to tell us more about the business of writing!

Is there a message in your novel that you want readers to grasp?

Life isn’t always easy. Juggling work, friendships and a social life can be hard. Finding the right person can be difficult. There’s no one right way of doing so. Sometimes even with the best engineered plans, Life has something else in store for you.

How much of the book is realistic?

All of the book is realistic, although only a few anecdotes are actually taken from any event I have experienced or any trait of anyone I know personally. There are no characters based on people I know. That said, one of the most cringeworthy events in the book actually happened. I wanted to write chick lit without the fluff, so contemporary fiction which reflected people’s everyday lives and the trials and tribulations that befall them, as well as the happy occasions. I like to think of it as chick lit with extra realism.

What was the hardest part of writing your book?

Editing it. I thought it would be easier than last time, as last time Sign of the Times started out at 300K words and was reduced after ten revisions to 120K. Don’t ask!

Anyway, The Dating Game started as 115K and is now around 110K. I learned a lot from last time. But I also learned a lot about proofing and editing my own work before it went out to the professionals, so that required a lot more revisions. As a writer, you constantly notice parts you would like to change, tiny proofing mistakes etc. It is neverending, but one day you have to decide ‘That’s me done with that,’ and move on. Otherwise you would go mad! 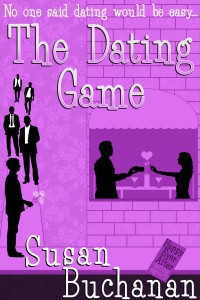 Tell us your latest news.

The Dating Game launched on 2nd November and I will take a few weeks simply marketing it. The launch lasts a week from 2nd-9th Nov.  There is a whole series of events, raffles and competitons. You can win a copy of 1 of 55 ebooks and Amazon vouchers. It’s a huge event and took a lot of co-ordinating. Once the dust settles mid-November, I am going to start planning my third novel. All I can tell you about that at the moment is that it features a male protagonist, a few love interests along the way, several life lessons, plus several key decisions for my main character to make which will seriously impact on his life.

Do you have anything specific that you want to say to your readers?

First of all, thanks to those who have read Sign of the Times and shown an interest in my writing. I chose rather a bumper task for my first novel, in integrating the lives of 12 main characters, plus their entourages. The feedback I  have had from readers boosted me to dust off the three chapters I had written of The Dating Game three years ago. I then wrote the rest, buoyed by my readers’ enthusiasm and their wonderful (and sometimes not so wonderful!) reviews.

I also took on board that they loved certain aspects of my writing and I incorporate that into The Dating Game, specifically the section in Barcelona. My third novel will also feature a foreign country, again, because readers told me they particularly enjoyed reading the Italian section of Sign of the Times. They could almost taste the food, see the splendid scenery and ogle the gorgeous men!  I love travelling and have been to many countries. My only difficulty was deciding which one to choose.

I have also enjoyed chatting with readers on Twitter and FB and many now leave me comments on my blog, too, which I love. I hope you enjoy The Dating Game and, all going well, I hope to have a third novel to share with you in the Spring.