“You told her?” I said to a friend who is in the middle of a prolonged separation from her husband.

My friend is a wonderful listener. One on one, we have talks of such range and depth, I often feel like I’ve left the therapist after we have lunch. Unlike me, in a crowd, she’d rather watch than take the limelight. While I might set my husband’s car on fire, tell the world about his sins, or write a plot based on our breakup (were he to do to me what hers dared) she is internally grappling with a range of emotions.

“Yes,” she said. “I had to.” I was surprised to hear her say since she is a very private person.

“She asked what happened. I didn’t know what to say.”

“People ask you that?”

Even extroverted me, who is an impulsive blurter-outer of all and sundry phrases,  was shocked to the core. I might wonder what happened but even I would restrain  from asking my boss, co-worker, or fellow nursery parent, for the details.

“You won’t believe how many people ask,” she replied.

Fuming for my friend, as news of the latest installment of intrusion came, I did what I do when I have observations on humanity. I tweeted.

Note to self: “What happened?” is NOT the reaction when someone says she is SEPARATING FROM HER SPOUSE. #duh #yeesh (not me, a friend). #fb

Immediately a few people Tweeted back, wondering why “What happened?” is a less than optimal response (the feed). In short, the question seems a poor cover up for obvious nosiness.

No doubt the fishbowl nature of expat life makes me queasy at the idea of people in the carpool, workplace, neighborhood having more information than they need. In a social setting where people know the most intimate details about each other, where you go on vacation and with whom, how long cars have been parked in a spot in a neighborhood, who is eligible for a promotion, who was fired and who really did resign, I cringe every time my friend says she didn’t know what to say when someone asked her what’s going on.

Yes, I understand that life’s tragedies will come out eventually. The very nature of the word means they are not something we can hide from.

Surely we all cringe at the over share of details during these traumatic moments; changed Facebook statuses, Tweets, or otherwise.

Word to wise, (as I’ve learned from another acquaintance’s loss, a year plus now, of a baby she never discussed with me): friendship has a variety of meanings, depending on the individual. If someone wants you to know the back story of a particular personal event, s/he will tell you.

Until then, best keep the quest for details to writing related tasks.

PS my short list of optimal responses to life tragedies: 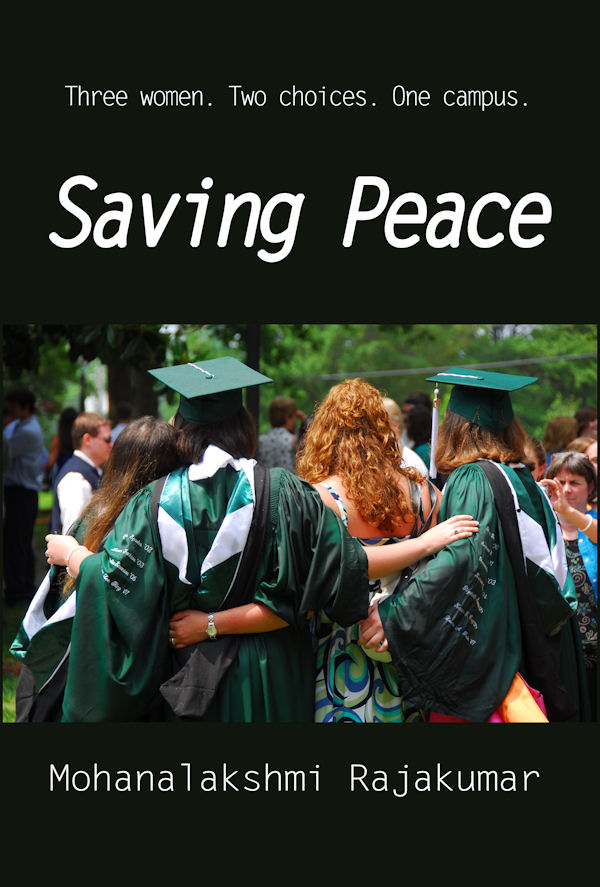 June is the month of graduations. Whether from high school, university, or kindergarten, students of all ages complete one stage of life and move on to another.

On those days, family and friends gather around to celebrate the trials and tribulations that were overcome for those hard won pieces of paper. Often during these times we hold dear those who were in the fire alongside us. Our classmates become our friends, bridesmaids, even birthing partners.

What I wasn’t prepared for when I graduated from university was that the very people who I had laughed, cried, and studied with were not the people who went forward with me into the rest of my life. College, it seemed, was it for these friendships. These women who had vowed we would pick up each other’s dentures from the nursing room floor are now strangers to me, people I remember fondly, but with a tinge of betrayal.

I wrote about the effect of time on college bonds in my first novel Saving Peace. Lucky for me, my exploration of friendships didn’t stop with the dissolution of that ring of friends. I graduated from that circle into another one.

“How could I have been so stupid?” a friend asked me, and herself, for the umpteenth time since the breakup that had rocked her world.

“Stop asking why,” I said. “It’s not a productive question.”

You may be thinking right about now that I’m not the kind of friend you want when you’re looking for a shoulder to cry on. The fact is I gave her the truth I knew because I had learned it in my own fires. Truth that had helped me deal with life’s surprise twists and turns over the last seven years. Sometimes you can’t stop to ask questions—you have to keep going. The perspective comes later.

“I had such dark thoughts this weekend,” she said. “I thought about ending my life. The downward spiral nearly got to me.”

Such honesty deserved bravery in return.

“You’re not the only woman to ever have her heartbroken,” I said.

Again, you may be shaking your head, thinking I’m a right b*tch who needs telling off for kicking my friend when she’s down.

Actually what I was doing was giving her a hand up. Realizing that catastrophizing had the effect of hiding a Trojan horse inside my mind set me free from habitual negativity. Stopping the gateway thought, like a gateway drug, keeps you from slipping down the slope of self-loathing and doubt.

I didn’t lecture my friend. I didn’t give her advice. I kept presenting her with the truth in the face of her fatigue, dismay, and fear. Because she had been doing that for me for the several years that I knew her. In light of all the steadying perspective she had given me, speaking truth to her was the least I could do in return.

What do you think about saying the hard truths that someone might want to hear? What are the things you wish someone had told you?

I completely agree when they say the truth hurts. But wouldn’t you rather take if from someone you love in a safe environment? Lies are used by those who betray us in order to postpone their discomfort or our pain. Eventually both catch up with us.