Friday at 6:00 p.m. I’m the first to arrive to ladies’ night. This rarely happens. In fact, it’s probably safe to say in the instance of this particular group, I’m always last one in and first one out. On to a school fundraiser, or a birthday party, or some other family summons that sees me double booked.

But tonight I’m the first to arrive and the hostess pulls me into the kitchen.

“Oh,” I said. The one word reaction was all I could muster in the face of yet another person announcing she was returning back to her everyday life.

Depending on where people are in the average three year expatriate cycle, the time-to-resume-regularly-scheduled-programming talk is always right around the corner for someone. But a dip in global oil prices ensured the start of 2016 as a particularly dire time for contracts being terminated, budgets slashed, and the proverbial shoe falling in Qatar.

There’s a typical pattern for those who are leaving: first, euphoria at the prospect of a new job or returning to the bosom of one’s family. Secondly the delight at knowledge that all the creature comforts you’ve been denying yourself, or strategizing to get delivered at regular intervals, will soon be back at your fingertips. Then, with the threat of deportation no longer on the horizon, a how-I-really-feel-about-this-place fount of self-expression flooding her social media. The curve on the leaving staircase is particularly sharp if one is going home; less so if there is an onward destination.

For those who are left behind, immediately there’s a gnawing sensation when you hear the announcement of a departure. Then comes the wistfulness at the thought one day it will be your turn. Finally, the no-man’s land of former vivid friendships now sustained on social media where the former desert denizen posts every negative article written about your former shared city.

Except you kind of like living where you are and so you call up a friend and commiserate. One of the few who’s still here, that is.

Domestic workers, or maids, may be no longer be a staple of North American homes. But she is a figure central to the running of many households around the world. The Middle East, Asia, Africa, and Latin America are all regions where domestic workers cook, clean, and help with children.

I interviewed many maids/nannies in the research for my novel, The Dohmestics, about this intimate employee-employer relationship. (PS tell me what you think about this potential new cover for the novel in the comments below).

In real life, the Shelter Me project has developed a handbook for employers to handle those questions that first time employers often contemplate: how many hours should she work? What is a fair salary?

Here’s to everyone who puts in a hard day’s work receiving appreciation for their efforts.

Have you ever employed someone in the home? 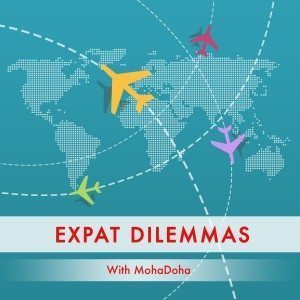 Childhood is traditionally filled with summers playing with cousins, and holidays being spoiled by grandparents. For expat parents, however, raising children away from home is a trade off.

Tune in this month to learn about the benefits and challenges of growing up in another country.

We are raising two multicultural children overseas so this topic is near and dear to my heart!

Have you had a fish out of water moment at home? Share your story in the comments section and we may read them in the next episode.