In the story of the Tortoise and the Hare, I know exactly which creature I am: the hare. This was evident when I was younger: studying a bit all semester and sleeping while my college roommate crammed all night, her Dr. Pepper’s lined up on her desk. When the exams were handed back we each had an A; hers was .5 higher than mine.

The memory of the lesson I learned that day stays with me: do a little bit at a time and you’ll be done by the deadline. This was my secret to NaNoWriMo 2014. I began the month on an overnight flight to Prague for a conference, with my laptop out, typing away. There was a week or so where I thought the story I was telling was utter rubbish; then the detective found his sidekick and sparks flew.

You’ve got a great story, I told myself, in the lead up to Thanksgiving when it was unlikely I would be able write one word, while hosting 7 adults and 7 children. 30,000 words that didn’t exist before November 1.

Then an interesting thing happened: I went through my chapter list on Saturday and Sunday, adding words to those under 1666 (the daily NaNo average).

Yesterday I wrote another 1200 words. That hare won the race. This hare has more story to tell.

Here’s the final excerpt I’ll share in my NaNo journey.

Amita, Manu’s sister, is looking for her brother who was reported to have entered the country a few weeks ago. Her dismay is representative of the many families who do not hear from their relatives once they enter their host countries.

Stay tuned for more updates about this work in progress (and the title is still missing…).

PS this scene employs the infamous writing adage “Show, don’t tell” the reader what’s going on with your characters. We try to experience Amita’s confusion with her, rather than learning about it second hand.

Amita took another step forward, grateful he hadn’t pushed past her like so many other Europeans did when given half the chance. “I look for my brother,” she said. She pushed the passport copy of Manu and his approved work visa under the opening.

“You housemaid?” The man asked, his hands unmoving.

The man’s narrowed gaze is why she had hoped Madam Cindy would take her to the embassy; her whiteness would have shamed him into being helpful.

“My brother missing,” Amita said. “He here for three weeks. I no see him.” She managed in the English he was forcing her to speak. “Miss Laxmi she arrange contract for him.”

“That’s terrible,” the woman murmured behind her.

The man picked up the sheet of paper. There was no nametag for her to record a name, like Sir Paul had asked her to get before he left on his trip. He would have come with her but he had to go to a conference in Paris. Busy. Everyone was busy.

“Contracts,” he said, tossing the paper back at her.

“This not contract?” Amita asked in confusion. This was the document the woman had supplied the last time she visited the embassy, looking for a job for Manu. She had promised an office job, as a kitchen service man, boy as they were called here, where he would bring water, tea, coffee, or juice to those having meetings.

The man turned in his chair and tapped the window in the direction of one of the stations in the main room. “Contracts, there. Go see contracts.”

Amita picked up the copies of the visa and passport, the only tangible proof she had that her brother had made plans to join her in the Arabian Gulf. She moved through the rows of chairs to the counter the receptionist had indicated. There were two men here, one seated, the other standing and pointing out something in a stack of papers. Similar stacks rose like little towers on every surface of the room, some in chairs as well. The men in this room stopped talking when she approached. “My brother,” she said. She pressed the papers forward again. “I no hear from my brother.”

I’m thrilled to help spread the word about this book because Barb Drozdowich is my design/newsletter/blogger guru. She has been fantastic to work with and knows quite a bit about how writers can make the most of the blogosphere.

Do you feel out of your comfort zone when dealing with book bloggers? They are the New Gatekeepers to book publishing success – but how can you tap into that source of free promotions by putting your best foot forward?

The Author’s Guide to Working with Book Bloggers combines the advice of 215 blogging professionals collected in a survey covering all aspects of communication between authors and Review Blogs. Whether you are a new author, or have many titles under your belt, let us demystify the promotion of your book on a book blog.

You’ll learn about whom and where book bloggers are, and the following: The Query, The Review, The Giveaway,The Author Interview, The Guest Post, The Book Blurb Excerpt and Cover Reveals and more! 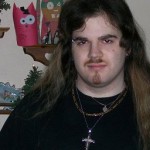 This week, I’m featuring an author outside of my normal reading genre. Crossing genres is not only healthy, it’s important to keep your creative juices flowing. Think of it kind of like rotating crops on a field. Your mind needs the variety. Steven Vincent tells tales that are between Fantasy and Science Fiction. As a kid, he was immersed in video games. They were 16-bit and not much for plot, but that prompted him to create his own stories. This is where his storytelling began.

How would you describe your writing persona in 5 words?
Determined to entertain people.

Try to describe yourself in one sentence.
I’m probably the most ambitious person you’ll ever meet!

Where would you live if you could live anywhere in the world?
I live in Milwaukee, Wisconsin, and that seems to have worked well for the last 22 years! I would like to see Ireland or Japan someday though, if that counts.

Did you have support during your decision to be a writer?
Oh, for sure! My whole family was behind me all the way, and still supports me on every leg of the race.?Process: 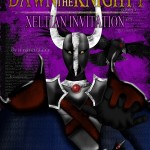 Do you read reviews written about your work?
I think reviews are very important, good or bad. There does come a point where criticism becomes someone’s noisy opinion though, and every person – author or not – has to know when to smile and nod, then move on. That’s actually one of the major themes of Dawn of the Knight.

What’s your creative process?
I get an idea, and let it sit in the back of my mind for a month or so without paying it much thought. You’d be surprised how quickly material builds up subconsciously, so that when you sit down to ‘flesh’ the book out, you’re all set.

Do you write on a desktop or laptop?
I wish I had a laptop! But then again, I’ve been writing on the same computer for so long I’m not sure I could make a switch.

Do you have a day job?
‘Help Wanted’ signs are hard-pressed for work around here! Writing is my preferred job though, and it’s picking up pretty fast, so I’ve got my hands full anyways.

Do you have any advice for other aspiring writers?
Yes, especially to those who choose to self-publish; learn the market. Get to know some other authors or bloggers, find out what sales techniques grab your attention, learn how to use the social networking tools like Twitter, Facebook, and Goodreads, and learn the market a bit. You can write a great book, but it doesn’t go very far if nobody can see it! At the end of the day though, there’s nothing like hands-on experience.