I love supporting other authors and it’s been a while since we’ve been inside the studio with a writer. Today we have Amy Lignor, author of the Young Adult series the Angel Chronicles.

Amy began her career at Grey House Publishing in northwest Connecticut where she was the Editor-in-Chief of numerous educational and business directories. Now she is a published author of several works of fiction. The Billy the Kid historical The Heart of a Legend; the thriller, Mind Made; and the adventure novel, Tallent & Lowery 13. She is also the owner of The Write Companion, a company that offers help and support to writers through a full range of editorial services from proofreading and copyediting to ghostwriting and research.

What was the hardest part of writing your books?

I still think the hardest part is finding the time to do it.  Everyone should take at least two hours every day – somehow, and I know this is difficult – to sit down with a pen and a piece of paper, or in front of that computer and just write.  Even if you’re not in the mood.  I say this, because even if you’re tired from work, school, or everything else that life is throwing at you, once you begin to write everything seems to fall into place.

When I have the monumental desire and passion to write, it just comes out.  And your mood can fit your writing.  Say you’re angry at that moment in time.  I had to train myself to sit down and write a battle for the book, or a fight in the book, something like that if I was feeling a bit angry at the time.  It not only helps the books to get finished, but if you’re right there in that mood, your feelings come out almost perfectly on paper with no struggle at all.

Was there an easy part or any part of writing the book that surprised you?

YA was a little intimidating.  I have a background in historical fiction and puzzles, stories where I like to take various things like the Acropolis and ‘link’ them somehow to a haunted mansion in the U.S. and a garden located in Glastonbury.  So when it came to YA I was a bit worried about the whole thing.  I was very into the angel and warrior team that I had created in my mind, but I was amazed that once I began their dialogue and their interaction with the other ‘human’ characters, everything seemed to just flow.  The twists and turns that kept the book mysterious seemed to just ‘appear’ when I sat down and began every day, so that was really thrilling for me. 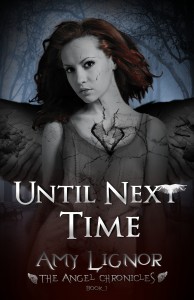 What advice would you give you aspiring or first time novelists?

This is a very hard industry that can cause depression and anxiety really quickly.  It can also cause really good writers to give up completely and throw their manuscripts into a filing cabinet.  And not to sound like some awful commercial, but you have got to keep going.  Once your manuscript has been written and polished by an editor to make sure it looks its absolute best, you have to write a query letter.  And this is where a lot of people get stuck.  Make sure the query is no longer than three paragraphs and has a real ‘hook’ – something that jumps out at the agent who’s reading it.  But always remember that our truly great authors were rejected more than once before they hit it big, so keep going.  Just because one agent or publisher doesn’t like something or they’re not looking for that particular subject at the time, doesn’t mean the next one you contact won’t be the one you’ve been waiting for!  So make sure you do not give up just because of a ‘no.’

Have you ever had a crush on a fictional character? Who?

Well…this is about as ‘girlie’ as you can get, but seeing as that this book was written over a hundred years ago and is still being quoted, and movies are still being made out of it, I have to say Mr. Darcy.  I know, a lot of chicks say that, but this is a guy who will always be there.  He was the one who said those eternal words: “I love you most ardently.”  And, frankly, no YA or adult hero will ever be able to touch that guy in charm or elegance.  I will always love him!

What was your first favorite book?

It was a  family tradition, actually.  When I was a small child my mother always read, Goodnight Moon at bedtime, and when I brought my own daughter into the world, I read the same book every night and she grew up loving it.  From an older point of view, there are so many I love.  But the one I couldn’t put down first was The DaVinci Code.  I love puzzles!

What book(s) are you currently reading?

Brian Selznick wrote a gorgeous book called The Invention of Hugo Cabret which is, of course, now a huge movie called HUGO that’s sweeping up all the awards at the Oscars, Golden Globes, etc.  I loved that novel, so I am now reading (AGAIN) Mr. Selznick’s amazing book called, Wonderstruck.  If you get a chance, read these, they are completely mystical and utterly fantastic. Selznick is one of the best authors of any time period!

Find out more about Amy and the series on  The Angel Chronicles web site: http://www.the-angel-chronicles.com

Ask a question or leave a comment for her here.