It’s been a wh 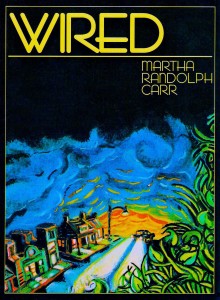 ile since I’ve hosted another writer here as part of the Writer’s Studio but I’m delighted to feature an interview with Martha Randolph Carr, author of Wired. She’s the author of three books and has a weekly, nationally syndicated column through the Cagle Cartoon syndicate on politics, national interest topics and life in general. Martha is also a melanoma survivor, Chi runner, occasional rower and skydiver and mother to Louie. She resides near her son in Chicago, IL, where everyone is always welcome to stay for dinner.

Wired traces the story of Mary Elizabeth and Charlie’s marriage as it fading away. Charlie tries to just get along and Mary Elizabeth struggles not to disappear completely. A murdered teenager is discovered at the local teenage hangout on a bluff high above main street bringing back memories to Mary Elizabeth that she would rather forget but may hold the key to saving an entire town. But when the bodies keep popping up everyone must struggle with feelings of guilt, shame and redemption.

1. How did you get started as a writer?

I was a newly single Mom with a one year old who had always wanted to be a writer and finally found the courage to start. That was 23 years ago and Wired was the book that came out of that first experience.

2. What was the hardest part of writing your/this book?

I was writing about things that I had wanted to say for years but was too afraid to do it and so it felt like the first act of defiance on a lot of levels to say, I’m a writer and then take on such potentially tough topics.

3. Was there an easy part or any part of writing the book that surprised you?

I was a little surprised at how quickly I wrote the sex scenes and how much readers have loved them! I was also very surprised at the gut reaction readers have always had to Wired and how, for many, it’s made it possible for them to share a deeply held secret. For others it’s gotten them to reconsider how they judge others. That’s powerful stuff from a thriller.

Pick a genre and run with it. Develop the craft of that genre so that you become a master in it and then branch out. Be open to taking advice and willing to take direction and just keep writing. Hang around other writers and go hear them read so you can be reminded on a regular basis why you wanted to write in the first place.

5. Anything else you want to tell readers?

Martha loves feedback from readers so let her know what you thought of Wired at martha@marthacarr.com.  Also, look for her newest book, The List sometime next year.

From a distance, particularly in the headlights that night, she looked as if she were sleeping with her knees curled up to meet her elbows. A guy honked his horn a few times before getting agitated and throwing his car into park. Told his girlfriend in the seat next to him to wait as he pushed the door open and stomped over to tell the girl to get out of the way, sleep it off at home. Later, he’d shake and cry as he called the police, trying to explain what he knew, who he saw. Tell them that the girl was in his class at school, that he had seen her earlier that day, that her skin was so cold to the touch. He’d have nightmares about it for years to come, each time snapping awake before he touched the body and felt the skin slacken under his fingers.
The summer was about to take an ugly turn for the worse, for everyone.

………………..
Charlie heard something through the ceiling, too faint for Matthew but he thought he knew what it was. Why was she doing that? Was it the paper? He looked at the front page and saw nothing unusual except for the murder but they didn’t know the girl and they certainly never went near the bluff. Was it last night? He waited until after lunch and when he put Matthew down for his nap he looked in on Mary Elizabeth to see if she was sleeping. She was in the middle of the bed snoring softly with her arms out to the sides, her fingers hanging over. God, it had sounded like a dog moaning. What did that to her? Mary Elizabeth and Charlie had stopped talking to each other about anything that mattered a long time ago. He turned to go back downstairs to read. Better just leave it alone.

Enter to win 1 of 3 free paperback copies of this novel on the official Wired blog tour page. The winner of the give-away will be announced on Wednesday, October 26 – be sure to enter before then! Just can’t wait to read Wired? Pick up your copy in the Kindle, Nook, or iTunes stores or visit Smashwords with the coupon code AK95A to receive a discounted price (just $2)!

Don’t forget to vote for my blog in the traffic-breaker poll for this tour. The blogger with the most votes wins an Amazon gift card and a special winner’s badge. I want that to be me! You can vote in the poll by visiting the official Wired blog tour page and scrolling all the way to the bottom.

Learn more about this author by visiting her website, Facebook or GoodReads pages or by connecting with her on Twitter. You’ll definitely want to check out Martha’s Mystery Blog–each week a new short thriller is serialized Monday through Friday. The entries are nice and short, easy to read via smart phone or tablet. It’s all at www.MarthaCarr.com.