Evey year I pick a writing related activity and go; sometimes it’s a residency where you meet with other writers under the tutelage of one person, other times a master class when you submit manuscripts ahead of time and receive critiques. This year I chose a conference because it fit the dates I was available and gave me a reason to travel to a city I hadn’t seen friends in quite  a while: New York City. 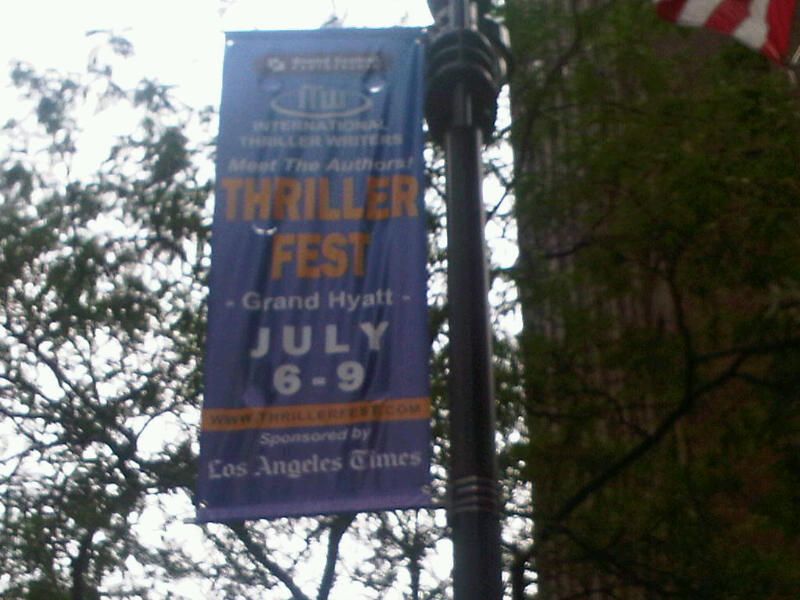 Thus my journey to ThrillerFest happened innocuously enough-like most other things in my life currently chosen for it’s ability to satisfy the matrix of mother, expat, vacationer. Though I don’t writer thrillers (that genre up from mysteries which are now mostly puzzle, not murder or crime related) I was game for CraftFest which seemed very focused on the how-tos of writing and also AgentFest which gave you access to 65 New York based agents and 3 minutes to pitch your(self) and book concept.

Often people want to know how you find out about these kinds of things and this was via Writer’s Digest magazine (there are tons of other articles about ThrillerFest including the last two days which were very genre specific). If you are serious – or want to become serious – about writing, then surround yourself with people who know more than you. More on this later.

There were four days of full on family fun before CraftFest started so that I almost forgot why we had come to New York. Then on Wednesday, as I walked the three blocks up to the Grand Hyatt, I felt a bit like the new kid in the neighborhood the first day of school. To my utter delight people were so nice, I couldn’t even believe I was among other writers and very well known, best sellers at that.

I made it to 4 out of 6 possible talks that first day only because half way in, my brain couldn’t take anymore. It was like standing on top of a geyser when you thought you were at a water fountain. Pages and pages of notes, three days later, I had a lot to ruminate. I’ve distilled the points that stood out the most in the hopes that it may help those of you who also want to learn more about writing or have works in progress.

Work hard and tell the best story you can.

Every person who stood up and spoke (and there were dozens I didn’t get to see as the sessions were concurrent) spoke about the daily grind of writing. Now people often look down on popular fiction as though it didn’t take as much work as literary prize winners; that the act of churning out a title a year were in some way easier than writing the next Booker prize, but none of the authors who led sessions or panels at ThrillerFest had this attitude.

Even agents were on this band wagon as Simon Lipskar of Author House echoed: “Demand the best from yourself.”

Don’t worry about anyone else (especially the market).

There was a lot of industry talk, or all those details related to book selling, as much as the crafting of books. Here people had similar advice: don’t write anything but what you want because the marketplace is running scared of ebook sales at the moment.  The price point for ebooks was discussed at length as well as royalty structure since the advent of the .99 cent to $2.99 book on Amazon.com has recently received a lot of attention.

The key messages: tell your story, not one you think someone will want to buy.

At first makes  hearing this makes you feel good but then you hear about the supply chain your book must travel through: the muddy waters from agent to editor, onward to marketing and sales, through the narrow door into the bookstore and then into the hands of the reader.

Balancing writing and selling is on everyone’s mind as is the advice that every author must now market him/herself. Again the contradiction reared its head as the only way to get people to read your book was purportedly to write a good book.

The reader and the story deserve it.

Ultimately the great thing about ThrillerFest was that everyone: Authors, agents, readers were passionate about books, storytelling, and the art of making or finding a good read. The amount of work that goes into any book – digital or print, best seller or dust gatherer – is nothing to take lightly. It’s not uncommon for writers to say that there are books that will never see print; one very well published person said only 10 of his list represent the 16 total he’s written.

The legendary David Morrell with 39 years in publishing pulled all three of these themes together in his self declared pep talk to attendees.

He is also the one who said “Be an A+ version of yourself not some other writer.”

Writing, in short, is not for the faint of heart. It is the equivalent of standing out on the street corner and asking passerbys to be your friend – all day, everyday, the minute your book is released.

I remind myself of the above and the other copious notes as I get the manuscript of my second novel (the first one may be a dust gathering manuscript, unlikely to see the light of day) together to send to the seven agents who requested to see pages. Yes, AgentFest was like speed dating; one second you’re talking to someone who says yes or no (they were all polite) and the next you’re at the table next to the previous paramour, hoping for yet another yes.

It was refreshing to be able to say “I don’t write Thrillers” and still have people listen to the literary fiction I’m polishing.

Do you want to know about how to pitch to agents, draft a novel, revise, etc? Let me know here and what in particular is of interest and I may turn this topic into a series of posts as well.